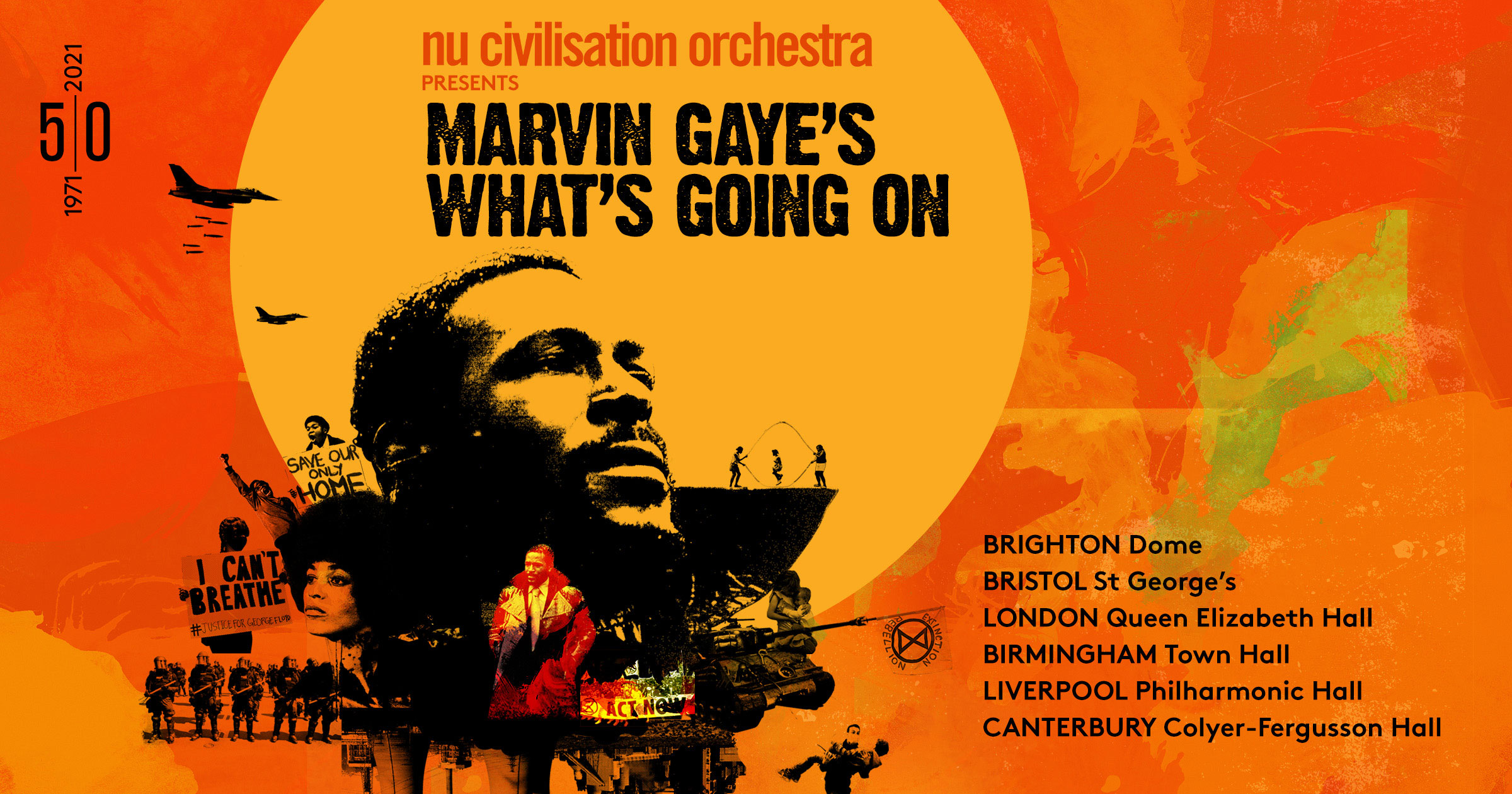 In partnership with the grandest music venues and organisations around the UK, and funded by Arts Council England National Lottery Funds, the six date UK tour kicks off during October’s Black History Month.

The NCO has a vision of bringing new expression to classic repertoire and providing a platform for new arrangements and compositions from some of the most exciting young musicians in the UK today and will feature special guest, the award-winning actor Colin Salmon, who will take up spoken word duties for the London show, with a spoken word artist from each city (to be announced).

Acclaimed British soul singer Noel McKoy will join the tour on lead vocals as the voice of Marvin Gaye himself, he said “Since the time of the release of the album to the present day, every time I’ve heard or sung it I think to myself that mothers are actually still crying –  ever more so, and young brothers are still dying.  The tracks from this album were and still are the benchmark of soulful commentary from a black man’s experience which can be related to across the globe. Its spirit and honesty remain potent to this very day”.

Gary says “The What’s Going On tour will be a wonderful way to celebrate our 30th anniversary through one of the greatest albums of all time, while also highlighting the fact that the struggle continues. Marvin very much had anti-war sentiment in his heart, plus inner-city blues, social deprivation and inequality in the community. It is as relevant today as ever and it is important to ponder on, as so many of the challenges then apply now.  Thanks to all six of the UK venues and Serious who produce the London Jazz Festival, all of whom we have partnered with us to produce this ambitious tour. It’s going to be a powerful evening of music and we can’t wait to hit the road with the NCO.”

Pelin Opcin, Director, Serious added “Marvin Gaye’s landmark album “What’s Going On” is pivotal in music history not only with its statement making story line around inequality, struggle and injustice but also as an artistic masterpiece to lead to progression in soul, characterising the revolutionary vision of black music. Still relevant in its 50th year, EFG London Jazz Festival is proud to present the celebration of this iconic recording through the lens and talent of brilliant Nu Civilisation Orchestra and Peter Edwards. We are thrilled to strengthen our continuing collaborations with Tomorrow’s Warriors in their 30th year with this monumental project.”

The tour will see NCO reflect on our current times through the lens of Marvin Gaye’s incredible catalogue. What’s Going On was recorded and released in 1971 and Marvin Gaye’s masterpiece gave voice to a generation, as it reflected on the violence and turmoil of America with laser-sharp precision. Widely recognised as one of the most important albums of all time, 50 years later What’s Going On continues to resonate with the inequality, struggle and uncertainty of the modern day.

The show will begin with a prelude based on Gaye’s ‘Trouble Man’, that will create the cultural setting for the album through music, projections and spoken word. The second part of the show will focus on the genius of ‘What’s Going On’, conjuring up Gaye’s extraordinary song cycle and the tumultuous personal and political circumstances that drove the singer’s music-making.

Nu Civilisation Orchestra presents Marvin Gaye’s What’s Going On will be a fitting homage to a legend that inspired and connected generations and promises to be a magical, powerful and unmissable evening.

The tour is produced by Tomorrow’s Warriors, which celebrates its 30th year in 2021.